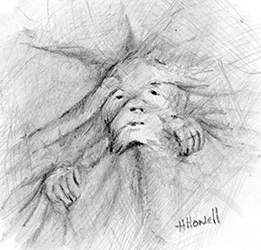 William set the torch to the fabric of the old woman’s dress and the flames weaved around her body, fiery snakes slithering upwards to caress her now silky smooth skin. Her long flaxen hair, formed a flaming halo around her young face. She tossed her head backwards and emitted a laugh so chilling, it made Lilly’s flesh creep. William was in some kind of a trance, his eyes wide and he too was laughing.

Lilly struggled to pull herself free from the claw like hand that held her tight. A face, features distorted, pushed itself against the plaster.
“Help us. You see, you hear. Free us now while she is distracted. Pull us from this prison that the Witch placed us in. We’ve waited for someone like you, someone who can see. Reach in and pull us free.”

“Leave me alone!”  Lilly struggled harder to break the hold on her. “Let go. I must help my husband.” She tried to prise each of the thin fingers away from her wrist, when one broke off into her free hand. Just for a second she looked at the bony digit with rotting flesh before  dropping it to the floor. “My husband, I must help my husband,” she screamed.

“You can’t help him now. She has him. Soon he will join us. Forget him, help us.”
Another face pushed against the plaster. It’s eyes sunken within its skull.
Lilly pulled away but the hand stayed fast around her wrist and as she pulled she saw a shoulder come through the wall.

“Oh god help me,” she cried as she stopped pulling away from the wall. As she did the shoulder disappeared once more behind the plaster. She moved in closer and the arm also disappeared, just the hand remained fixed secure around her wrist. She looked over towards the Witch and her husband. The Witch was now free of the ropes. She was of fire, red and yellow and was circling around William.

“Stop. Leave him alone.” Lilly yelled at the top of her voice.
The fire Witch swung around to face Lilly and saw the hand that held on to her. “You meddling girl. You can’t stop this or free them. They deserve their punishment as does he.” She pointed a burning finger at William.

“No! “ Frantically, Lilly turned back to the hand that held her and with all her strength started to break the other fingers off. Free she turned and rushed towards the Witch.
“I see you,” growled the Witch and with one quick move she flung an arm out towards the girl. From her fingers a fiery whip discharged and wrapped itself around Lilly’s waist. With a deft flick of her wrist, she tossed the girl through the window and into the cold dawn air.
* * *
“Are you all right,” An old man stood over Lilly’s crumpled body and shook her gently by the shoulder. “This ‘aint no place to be spending the night, girl. You’re as cold as death itself.”
Lilly opened her eyes and blinked several times. The sun was shining and she had to squint to see who was speaking. The last thing she remembered was the sound of shattering glass.
“How did I get here?”
“Well now, I can’t tell you that. I ‘spect you need something warm to drink. Wait while I fetch a flask from my truck.”  He hurried back towards the road.
Lilly glanced over and could see his truck. She shook her head as though to disperse the cobwebs that were shielding her memory.

He was back within minutes and pouring her a hot cup of coffee.
“There, girl, you get that down you.”
He held the cup out to her and his pale blue eyes searched her own as if trying to decide if she was really all right. Lilly took the cup and nodded her head in thanks. She sipped the hot black liquid and as it slipped down her throat and into her stomach she could feel it warming her flesh. She cast her eyes around her and as she did the cottage came into sight. But it was not a whole cottage, just the shattered remains of what it once was.

She dropped the cup and started to walk towards it.
“‘Ere, girl, where you going?” The old man called after her but she didn’t respond, so he  followed and caught up with her outside the cottage. “What do you want to look at this old place for?” He reached out and touched her arm. She looked at him but said nothing.

Lilly studied the remains of the cottage; a door frame stood, a brick hearth where once a fire burned and one single wall with its plaster cracking remained. She stared at the fireplace and then at the wall. “My husband,” she whispered as the memory came flooding back.

“Your husband?” The old man stood at her side.
“Yes.” She rushed towards the wall and slid her hands across its ancient surface. “He’s here, trapped in here.”
“What you talking about girl? It’s just a old wall.” The old man was beginning to think she wasn’t all right after all.
“Last night our car broke down further up the road.”
“Ah, yes I passed a car this morning. I wondered where it’s occupants had gone.”
“We came looking for help. This cottage was lived in. An old woman she let us in but she wasn’t what she seemed, she was a witch. She’s trapped my husband and others in this wall. I have to free him.”
“Don’t be daft, dear. This place, what’s left of it, is said to be a couple of hundred years old. I don’t know why they don’t knock it down and clear it away. Proper eye sore it is.”
“But, it wasn’t last night.” Lilly pressed her lips together and blinked to hold back the tears that were beginning to burn her eyes.
“You must have had a bump on the head, fumbling your way through these woods at night and fell where I found you. If that’s your car up the road, I’ll give you a lift into the nearest town where you can get some help.”  He turned and walked off.

Lilly leaned against the wall and pressed her ear flat against its cold and crumbling plaster. She stilled her beating heart and waited. At first all she could hear was a muffled whispering, voices mingled together but nothing clear. “William,” she murmured. “William, I’m here.”  She held her breath as she waited, ‘Lilly, help me, Lilly.’

The old man turned back to see her leaning against the wall. “Are you coming, or what?”
Lilly raised a hand in acknowledgement. She pressed her cheek once more into the plaster and whispered. “I’ll be back, William.”

As she walked towards the truck she knew what she must do. No ghost was going to get the better of me, she thought.  This time I’ll match fire with fire….