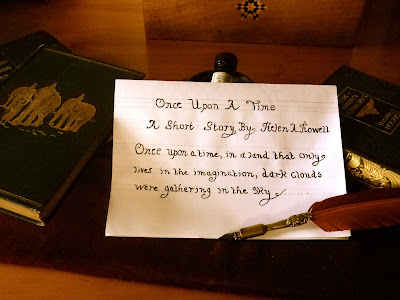 
“ The Wizard.” The Page stood aside to let the him enter.
“At your service, Sire.” Magico bowed, his hat toppled from his head and rolled with a clatter across the floor.
“Have you seen the sky?” said the King, as he kicked the hat out of his way.
“The sky?”
“Yes, the sky. Look.”
He walked to the window, Magico followed. They peered upwards at the dark motionless clouds, then at the people below who were hardly moving now.
“What do you make of it?”
Magico considered the black drifting clumps that, little by little, were cutting out the light. He stepped away from the window. “There is something I remember which I read in the ancient record books kept in the library tower. Tell me Sire, have you noticed how things have not been working the way they should today? Even my door knocker is misbehaving. ”
“Well,yes. At breakfast this morning I cracked open my egg and the yolk flew away. Of course, I ordered the cook to be flogged. What good’s an egg without a yolk? What is it you remember? Speak man! Do you know what the dark clouds mean?”
“I think I do,Sire.”
“What?”
“Something is troubling the Creator.”
“Creator? What Creator? I’m the authority here in this land.”
“That you are Sire, but according to the records, the Creator created the land, the town and the people.”
“Including me?”
“We all exist because of the Creator.”
“Does this Creator have a name?”
“They say it is called, The Writer.”
“And the dark clouds, what do they mean?”
“I believe they’re called Writer’s Block.”
“What’s this Writer’s Block mean?” King Boroff started to pace up and down, but as he did his legs kept getting stuck in the air giving the impression of goose stepping.
Magico stared at him, trying to fight an urge to salute. “Sire, you’re walking funny.”
Boroff stopped in mid step, leg dangling halfway between the roof and floor as if held by a string. He looked at his suspended limb, then at the Wizard. “Well don’t stand there. Help me.”
“Sire.” Magico placed his hands on the King’s leg and pushed. The offending limb shot down, and the King shot forward head first into the cushion on his throne. The Page standing by the door, covered his mouth to stifle a laugh, for he knew if he was heard, he may never laugh again. The Wizard glanced at the boy and placed a finger to his lips then turned back towards the King.
Boroff untangled himself from the throne. His crown had fallen over his eyes and his mouth was set in a downward turn. “Somebody will lose their head for this!” He tried a few tentative steps, before marching back across the room, landing an angry kick on the Wizard’s hat as he passed it, sending it sliding across the floor to arrive at the Page’s feet. “My legs took on a life of their own. What happened? No one controls my legs but me!”
“Sire, I fear it’s the Writer.”
“The Writer?”
“It’s changing things.”
“If the Writer thinks it’s going to mess with me, it’s got another think coming,” Boroff’s cheeks became redder as his temper grew.
A loud crack echoed from outside the window. The King and Wizard attempted to rush towards it, but amble was all they were able to do. They leaned out and looked up. The clouds had grown darker, but there was a gap where a small shaft of light was shining through.
“Sire, if those clouds completely cover the sky, we will cease to be.”
“Work some magic. You’re a Wizard aren’t you.” Magico looked at Boroff. “Well, what are you waiting for?” snapped the King.
Magico leaned out the window and waved hands as he started to chant. Flashes darted from his fingers like bolts of lightening. Then a flare, a BANG! and a whole lot of smoke. Boroff and the Wizard coughed and spluttered as they waved away the cloudy vapour to reveal a fat hen pecking around their feet.
“Call yourself a Wizard, bah.” Boroff kicked the chicken, which sent it flying off in a flurry of clucks.
“Sire, nothing is working as it should.”
“Didn’t those books say anything about what to do about this Writer’s Block?”
“Em, I didn’t read the last one, but,” Magico added quickly, “ I’ll go and fetch it and take it home to study.”
“Be quick about it. I want this problem fixed.” Boroff narrowed his eyes. “Or someone will pay.”
“Yes, Sire. I’m on it.”


The Wizard turned and walked to the door as fast as he could, but his old legs were feeling like wood. The Page reached out for Magico’s hat. He opened the door and handed it to him as he left. 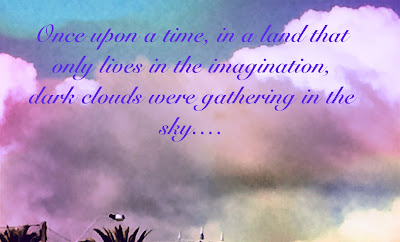 Once upon a time, in a land that only lives in the imagination, dark clouds were gathering in the sky….

King Boroff leaned out of the castle window and gazed upwards. Never before had he seen a sky like this. He had seen one filled with sunshine, and one filled with fluffy white clouds, even a sky filled with a blood red moon, not to mention a dragon filled sky, but never in all his days, one where dark clouds gathered like a heavy curtain waiting to be drawn across the heavens. He called for his Page.
“Sire?”
“Fetch me Magico.”
“The Wizard?”
“Yes, boy, the Wizard. Hurry!”

He watched the Page leave, then went back to the window and cast his eye over the land below. The market had began to assemble itself. Brightly coloured stalls dotted the landscape like sugared sweets on a cake. People went about their business, slower than usual. He noticed their furtive glances upwards. King Boroff looked towards the sky again, and shivered.
“The darkness is coming. But what does it mean?”

The Page tried to scurry across the town square, knowing the King would be watching from the window, but his legs didn’t seem to work as fast as they should. He weaved in and out of the market stalls, heading towards the far corner of town and the Wizard’s house. He was making fair headway when a hand reached out and grasped him.
“What’s your hurry boy?”
The Page turned. The broad figure of the pig farmer stood behind him. His tunic sleeves were rolled up and his hands bloody from laying out his meaty produce.
“I’m on the King’s errand. Best not stop me, you know how the King’s temper is. He beheaded three peasants last week just because they delivered a vegetable that wasn’t to his liking.”
“Where’s he sending you?”
“To fetch the Wizard.”
“The Wizard? It wouldn’t be anything to do with that sky up there, would it?” He pointed a podgy finger to the darkening canopy.
“I never asked. I know better than to ask. The sky is weird though. My mother would say it was an omen.” The Page looked up and shuddered.
“It’s a sign all right. Something bad’s a brewing. Have you noticed how everything seems to be slowing down?” Indeed the boy had, his legs for a start. The man scratched his beard as he too stared upwards. “You best be off; get that Wizard and get that sky sorted out before something nasty ‘appens to us all.” He pushed the boy forward and waved him away.

It wasn’t long before the Page was facing the wooden door of the Wizard’s house. He reached out for the brass dragon’s head knocker. The eyes on the head snapped open just as the boy’s hand touched its surface; a bolt of smoke and flame burst from its mouth.
“Ouch!” He snatched his hand away and shaking it, stuffed it under his arm. “What did you do that for?”
“How’d you like somebody banging your head against a hard surface?” The dragon stared at the boy.
“But you’re a knocker. That’s what’s supposed to happen.”
“That’s all very well for you to say. It’s not your head.” The dragon closed its eyes.
That’s ridiculous, thought the Page as he reached out again, but hesitating, held his hand in mid air before dropping it back to his side.
The dragon lazily open one eye and said, “Good choice,” before closing it again.
The Page hammered on the door with his fist, then waited a few moments before banging again. “Come on,” he whispered. The King will be livid if I don’t get back soon.

The door creaked open. “What’s all this noise?”Magico looked at the boy. “No need to hammer like that. There’s a perfectly good knocker.”
“It wouldn’t let me use it sir.” He looked at the knocker then back at the Wizard. “It burnt my hand.” He held his red palm up for him to see.
“That’s strange. It hasn’t done that before. I wonder why it’s misbehaving? A magic spell will fix it.”

Magico waved his hands and muttered. Sparks flashed from his finger tips, only to dissolve before they touched the knocker. The dragon open its eyes, stuck out its tongue and made a rude noise, then closed them again and started to snore.
“Nothing seems to be working right today,” said the Wizard shaking his head. “What do you want boy?”
“The King commands your presence.”
“In that case I’d better come. I’ll just fetch my hat.”
Magico disappeared and reappeared wearing a pointed black hat festooned with magical symbols. He slammed the door closed; the dragon snorted and puffed out a coil of fiery smoke.